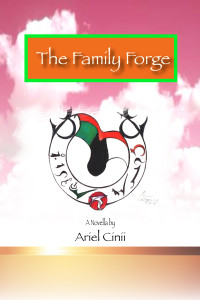 Look for https://www.createspace.com/3976299 and give this whole procedure 5-7 business days to be fully operational.

I am about to cross a barrier that I've been sniffing about for a long time, and I'm still full of trepidations concerning its fate, or that of its sister volumes of The Touching Lands Dance, but here we go. The Family Forge will soon become a real, live softcover book at about 212 pgs. (glossary included) available from Amazon.com for only $9.85! Carolyn, my editor @ WormholeElectric.com did the PDF file embeddng that stopped things cold in August. It's now undergoing a print review process, so hopefully all the files for the words and the cover will parse properly. If all goes well, I might even have some hard copies on hand at Philcon. The Kindle® e-book will still be available. May Those Beyond nod approvingly at my efforts and assist in its and my financial prosperity.

That's what I should have said.

otherdeb & Co. this Friday night while Hurricane Harvey was drenching Texas. I'd finished up when I went to the loo. Suddenly they were all gone.

So I walked uptown to some part of Downtown Brooklyn where I could resolve some puzzling {technobabble}: Sadie Quatre, my iPod Touch had started playing one of those low-charge restart tricks where you had to restart a cut at least four times from a white apple display (dead stop) to make it play normally. Usually, the same Good song fades out in the middle of the build-up. Don't let this happen while walking uphill to Mike Oldfield's Crises.
Oy!
"There's this black girl acting up on the street."
It doesn't matter whether your battery is full or empty becuase it soon will be after four or five such restarts.  Thinking of the above as a pretty good disciple for travelling in the Tesla Model 3 I shall (probably) own someday, I caught the artfully timed Manhattan-bound A train at Jay Street {end technobabble}, when those shiny doors slid opened to... her.

Though petite and colourful in my mind's eye,  I'd never noticed my invisible girlfriend take up so much ...volume, een if she hadn't splashed half a bottle of it on the train floor.  A splatter effect I shall see for all time. (nerd)  I hate when people spit. even the girls. Her gentle blonde-girl face was sculpted fine, though our eyes never met. Perhaps she'd drunk too much. Her white-blonde hair draped a curtain down her back. She played a balance game with the stainless steel supports, like they teach in Dance class. She wore just a little white bralet over something white and half undone. Tennis shoes, white and scruffy. No music played between High Street and Fulton; her two brunette escorts chattered away. I sat across the doors from them, snug in the next group of seats. My invisible girlfriend shugged and pretended to read from her iPod. She wore a pink T- shirt and grey Danskins.

I should have delivered that opening line, but she was too drunk and surrounded by girls. You know how that can be.  I didn't even hear one escort call her name. I wonder what it was. She continued to hang out in my mind, but got off fo real at Broadway-Nassau. I took a breath under the train's rumble on the way to Chambers, and I asked Adrienne,

She shrugged, snuggled up and shut her eyes.

This work was Produced Under The Influence To Influence Others Positively (PUTITIOP*). Part of a complete, nutritious breakfast.

By my best estimate, I believe that I have written data regularly in LiveJoural for ten yars in real, human time.

My ex, back when she was still just The Wife, or Galatonea, kept warning me that she'd leave me one day and I'd be Alone.  Okay, so my roommate died, an here I am, alone.

And I like it that way. And in the worst of times there's a room full of crap I can ge rid of.

I am "young and healthy", so far as I know. No great grey swatches in the comb just yet, and only

hms42 even mentioned crossing over to Dreamwidth, and that was at

otherdeb's dinner at Curry Heights on Rmsen Street. I had Banana Pakora, Beef Korma and 2 out of 3 pieces of Aloo Paratha. I was FULL UP.

But then I stared writing real  text for The New Baby Bird, with more to come. I started to feel the narrator, Emajin.  I still take a healthy walk around sunset, or the Vazw'u Nal.  Speaking of which, time to go.

This work was Produced Under The Influence To Influence Others Positively (PUTITIOP*). Security is an allusion.
Collapse